On the first Monday of each month I offer some reflections on a book I have been reading. These are not book reviews, but a reflection on how the book interacts with my story and the questions that I currently have. I share where the book takes me with my questions, whether it conjures up new ideas or questions, whether it helps me frame my experiences and gives me things to ponder. This month I am reflecting on Mission in Motion that one of the authors my good friend Jay Matenga gave me as a gift.  (Mission in Motion: Speaking Frankly of Mobilization, Jay Matenga and Malcolm Gold). 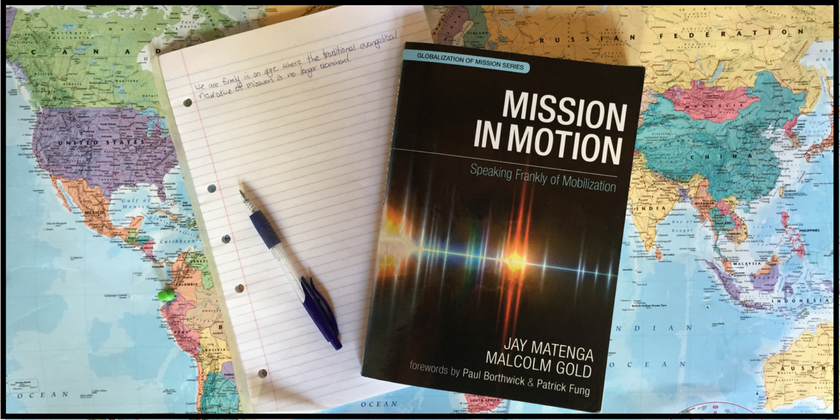 In many ways I have tracked with this book since I started working for a mission agency in 2008 and over the years Jay and I have had many conversations about the topics raised here. I am even quoted on in the book as saying “member care exists because community doesn’t”, I also recall a conversation about younger people needing inspiration not information that is mentioned towards the end of the book.

MiM describes a qualitative research project that was conducted over a number of years.  Starting in 2005, it involved semi-structured narrative interviews with people involved in mission promotion and recruitment (often called mobilisation) in nine countries. In MiM traditional missions is defined as “long-term, cross-cultural (if not specifically overseas), donation funded, gospel proclamation activity (or means to that end), with the intention of establishing and strengthening churches where none existed.” Into the context of traditional missions they introduce Bosch (1991) and his concept that mission is in crisis, due to contextual and societal changes. The researchers wished to investigate promotion and recruitment practices that would be considered best practices and to particularly look at those in the context of our changing world and the 6 factors that Bosch identified as contributing to the crisis. The book includes many direct quotes from the interviewees and it gives a fascinating insight into different countries perspectives on mission and on mission recruitment and promotion.

It has been six months since mission mobilization and retention was my work world, since I spent time gnawing at the problem of decreasing mission recruitment and funding.  I have moved on in that time and at times I wondered why I was reading this book.  At other times I just felt glad that I was no longer so bound into the mission scene. Although the authors paint a positive picture of a time of change where the traditional evangelical paradigm is no longer dominant. The fact that we are still talking about mission being ‘in crisis’ all these years after Bosch first pointed it out, and yet are still struggling with what the future of missions will look like is frustrating to me.

The pace and nature of change will not be deep enough or come fast enough for me.

MiM did get me thinking about mission again. Particularly wrestling with (as I have done for the last 8 years) why we are struggling to involve younger people in missions. The authors offer a couple of helpful directions for my thoughts to take.

I was fascinated by the introduction of the term from sociology of anomie. The authors define anomie in this way “at its root, the word indicates a sense of normlessness and potential chaos without apparent restraint or adherence to a common guide to negotiate our condition.” In other words we no longer have a reliable roadmap to help us navigate the shifting landscape, at least not one we all agree on (p.16). They claim (and I see this too) that the expectations and understanding of missions are disintegrating and we are entering a period of ambiguity. The ambiguity  is coupled with an exciting opening up of the future where anything becomes possible, as the new way is yet to form. Although they apply this only to the missions scene I would affirm that this also describes the church situation also.  We are all aware that the old ways are no longer working, but we are not entirely sure what the new looks like.  I believe that we are currently in such a state of fluidity that separating out these issues as MiM does to just missions, only tells half the story.   To move forward from where we are currently involves a broader conversation than the mission agencies are able to have by themselves.   The conversation needs to be rooted in theology and our understanding of the church, and it needs to happen before the implications for missions can be unpacked.

We need to be foster kiwi theology.

The quotes from the different respondents highlight some of the contextual differences from countries around the world. Throughout the research the respondents from Oceania seemed to see things slightly differently from the rest of the world. The term ‘missional’ for example has become common here but wasn’t mentioned by respondents from other parts of the world. Respondents from NZ also placed a higher value on relational recruitment practices than others. We need to develop a greater understanding of our context in NZ and stop looking overseas for guidance, but developing a deep sense of our own contextualized theology and missiology.

What next for missions

The book takes a very positive view of the changes that are occurring. Yet I think there are so many things that mission agencies are missing.  Mission agencies are caught in a theological shift. We are moving away from a post-enlightenment emphasis on a rational and word/doctrine based faith in which ‘gospel’ proclamation takes precedence. Instead a more Spirit focused and more holistic theology/spirituality is coming to the fore. It involves kingdom values in all of life, and caring about creation, justice and poverty are ways that our faith is demonstrated. Unfortunately the deep concern about creation, justice and poverty can become paralyzing in this world of destruction, injustice and an increasing wealth gap. Mission agencies need to work harder at reflecting a broader theological stance, and to engage those that are overwhelmed with the need and so often the church’s inaction on issues that are core values for them.

The question then becomes how do we frame mission within that space.

What excites you about being in a period of anomie?

How can we develop a deeper NZ theology and missiology?

How do you react when you hear the term ‘gospel proclamation?’

How would you frame mission, if it were to inspire you?

Looking forward to hearing your thoughts and impressions particularly if you have read the book.