Am I an evangelical?

Now I am not so sure. 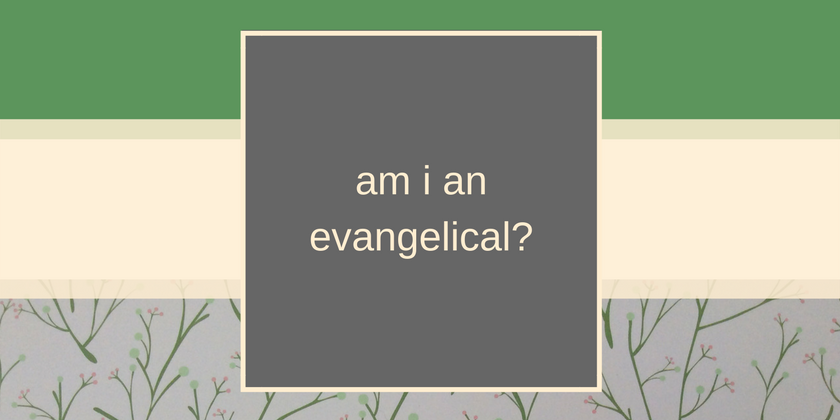 What seemed so easy then has become more complex, the more I know and the more I discover, the less certain things become. Other people seem certain about what it means to be an evangelical, and usually that is believing exactly the same things as them. Evangelicals are making the news a lot lately, their involvement in politics in the US and their vocal and visible stance on certain issues puts them in the public eye. Part of my hesitancy around identifying as an evangelical is simply wanting to distance myself from the negative stereotypes and the more conservative sections of evangelicalism. Michael Frost sent a tweet the other day that resonated a lot with me:

I was asked if I'm an evangelical. pic.twitter.com/6LeKc8va6q

On this journey to explore whether i am an evangelical or not the first question I have to delve into is, what is an evangelical?

Stuart Lange (affiliate link to A Rising Tide) defines evangelicalism as both a “historical movement and a set of doctrinal commitments.” (p.12). I find it interesting that he states as I found throughout my childhood growing up in the NZ baptist church, that there are groups of people who share the characteristics of evangelicals but do not explicitly call themselves evangelical. Lange goes on to say that from the “time of the sixteenth century reformation, ‘evangelical’ meant belief in justification by faith, and in the primacy of biblical authority and practice’. I might not express it exactly in those words, but if I was living after the reformation I think I could happily say that I was an evangelical. But as Lange says evangelicalism is a movement, so it changes and grows and lives. Lange identifies the roots of what we now see as the modern evangelical movement as emerging in the 1730’s in Britain and it’s colonies. At this time there was a new emphasis on revival, religious experience and evangelism. Ok so by those stands I think I can still happily and easily be an evangelical.

Today it seems that Bebbington’s definition of what it means to be evangelical is most widely accepted. He states that evangelicalism has four characteristics. Firstly a belief that lives need to be changed (conversionism). Secondly having a high regard for the bible (biblicentrism), thirdly putting faith into practice through involvement with social justice, care and sharing faith, (activism). Finally evangelicals emphasise Jesus sacrificial death on the cross (crucicentrism). There are not a lot of doctrines in this definition! For my own journey I can happily sit with three of these characteristics, I believe that people need to change, that the bible is the best way to understand God and his work in the world and in people’s lives, and how we are to live in the light of that. I believe that our faith has to be put into actions that show care and love to others and that introduce them to the God who created them. The characteristic I struggle with is the emphasis on Jesus sacrificial death, I have seen that an overemphasis on Jesus death, leaves out so much of the story. The death of Jesus does not stand alone but must be emphasised in context of God’s redeeming work throughout the history of creation and through the life death and resurrection of Jesus, and the continuing work of the Holy Spirit. This may just be a matter of semantics and interpretation, I think most evangelicals would agree with me on that.

Now this portrait of what an evangelical is, seems remarkably different to how it is used, and who it describes today. Remember that it is a movement and Lange points out that

“historians have shown how evangelicals emphasised different doctrines and practices at different times and were constantly adapting to new contexts”.

Evangelicalism in the US, the UK and NZ are vastly different things, they have grown differently and adapted to their contexts differently. Being a NZ evangelical is not the same as being a US evangelical. Many evangelicals have tried to force a definition based on specific doctrines, but that is not as widely accepted as the broader definitions based on characteristics. Lange describes evangelicalism as “a mindset rather than a closed system, and an unstructured transdenominational movement crossing many ecclessiastical and national boundaries.” Evangelicalism is not just one thing. Large publishing houses, popular bloggers and others from the US may give that impression, but I don’t think they are right.

The question then becomes who gets to decide what evangelicalism is?

It is always the people with the most power (or publicity) who get to make the definitions. I am seeing it more and more used almost as an insult – “if you think that then you are not an evangelical.” I found a lovely quote by Toni Morrison “definitions belong to the definer not the defined”. Just because somebody else says that you are not an evangelical doesn’t mean that it is true. It just means that you don’t agree with them and the doctrines that they think make up evangelicalism.

So I have come full circle, I started this post thinking that I was going to conclude that I wasn’t an evangelical, there is so much I disagree with many of them on. But if I disassociate myself from evangelicalism, if I say I am no longer that, I let those who have the most conservative doctrinally based image of what it means to be an evangelical claim the definition, to make it their own.

I am not sure they get to do that!

If I leave evangelicalism, then I leave evangelicalism stagnant, stuck in a particular model, never to move, never to change, unable to grow and contextualise. We let vocal people from the US define our faith. It ceases to be a mindset and an unstructured movement and becomes a narrow set of doctrines. I find that I am reluctant to leave it to that fate.

What are your thoughts? Are you an evangelical? What do you think it means?

7 thoughts on “am i an evangelical?”