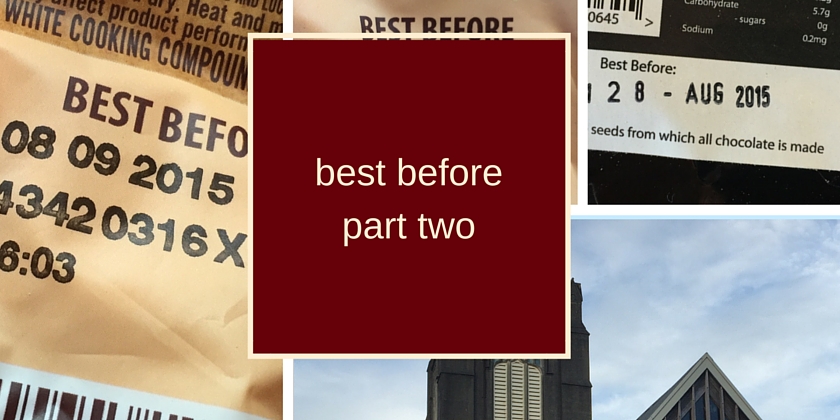 I made a frittata this week, with eggs that were past their best before date, it was perfectly fine and nutritious.  The eggs however were probably not of the same quality that they would have been when they were fresh.  When I say the church has reached its best before date I want to start a conversation about where the church has lost the quality of flavour, colour and scent that it had in previous years, not throw it in the rubbish.

I am guilty of generalisations of course and I am just looking at a little segment that is within my experience.  There are exceptions and that is good, it gives me hope.  My experience has been in the NZ evangelical mainstream (Baptist upbringing, occasional foray into Presbyterianism and currently Anglican) and I have worked for two evangelical interdenominational organisations, and studied at an interdenominational evangelical bible college.

What is the church?

If we want to assess the quality of the church, we need to start with a good understanding of what makes the church the church.  Not an easy question to answer in a blog post, especially as denominations have different emphases and understanding of what makes the church, and sometimes these have changed over time.  Unfortunately the Bible doesn’t provide us with an instruction manual for this, it give us themes, symbols and stories that give us hints and guides.   At its most basic and general the church as described by Erickson (1985) is to be the People of God, the Body of Christ, and the temple of the Holy Spirit.

The People of God

As the people of God we are aware of God’s choosing us and calling us to be his.  This is a call to live as a holy people and as a light to the world.  As the people of God there has been historically an emphasis on purity.  This can be purity of belief (who is in, and who is out) and purity of living.

I am concerned that the church has lost quality in this area.  The challenge of post-modernity has at best been met with misunderstanding and at worst with fear.  In the organisations I have been a part of I have noticed increasing conservatism of theology and missiology that leaves young people dis-engaged and ill-equipped to interact as holy, called people to the society where they dwell.  Generally those of us who grew up in an increasingly post-modern society (Gen X and below) are not conservative.  So mainstream evangelicalism is becoming increasingly conservative and younger generations are becoming less so.  This is creating a huge but unarticulated gap between younger people (anyone under 45!) and the church that is still heavily controlled by people over 50, or who tend to be naturally more conservative and ‘modern’ in their thinking.

The church seems to want to address this by talking (I am not sure they are doing it or doing it well) about increasing discipleship.   However often I get the sense that for many discipleship means teaching these young people how to think correctly.  Young people are on the whole not given a voice to delve into scripture well, to express their theology and to help the church understand what is relevant to them.

The increasing conservatism of the evangelical organisations, also results in anything that doesn’t fit in with that exact package of thought being labelled liberal – ie not Christian.  This leaves the young people confused as actually they are not moving that far from evangelicalism.  There is I suspect a huge group of them sitting unhappily on the edge between conservatives and liberals.  They would be happier with what is increasingly identified as progressive or post-evangelicalism, but it is still hard to find churches that express this theological position.   Rosemary Dewerse over on the Te Kare O Ngai Wai blog highlights research by Geoff Troughton who has been studying the extensive NZ Values and Attitudes Survey.

Where is the church for these people?

The Body of Christ

The second part of being the church is to be the Body of Christ.  Christ is the head of the church and he guides it and his activity directs it.  It is made up of a diversity of people who are following Jesus.  To be a body requires interconnectedness and interdependence, we make up the whole together.  A key feature of being the Body is unity, which of course tends to sit in tension with purity.  There is recognition that gathering with other followers of Jesus helps us maintain holiness, helps us grow, provides fellowship and expresses care for one another as members of the same body.  A large part of being the Body of Christ is being involved and committed to continuing Christ’s work in the world, often expressed with reference to Matthew Chapter 28 and the command to go and make disciples.

If overall we are feeling disengaged and ill-equipped to handle the society in which we live it is very difficult to make disciples.  A key question is, is the church growing?

Are we failing to engage well with society around us to express our faith and introduce others to Jesus?

I am reluctant to ask this question as I think that a focus on numbers can be detrimental to considering health and depth.  But perhaps we must consider it as a mark of quality, that we are being the Body of Christ and making disciples.   The statistics provided in the NZ census show the decline of mainstream denominations.  http://www.stats.govt.nz/Census/2013-census/profile-and-summary-reports/quickstats-culture-identity/religion.aspx

The Temple of the Holy Spirit

Are we listening to the new that the Holy Spirit wishes to lead us into?

The church is to be a community that looks forward to the time when Jesus will return and all will be renewed.  I have a strong sense that the church as we know it is on the edge of a great disruption, and that the wind of the Holy Spirit is preparing to sweep through to refresh and revive the church in a new way.

How do you think we should define the church?

Where do you see the church as having retained quality?

Where do you see the church as struggling with quality?

2 thoughts on “best before – part two”